THE TAROT WHEEL ACCORDING THE MARSEILLE TAROT

At this stage, you might admire the structure of the Tarot Wheel as presented on the previous pages. Or on the contrary, you might ask yourself an important question. If the structure of the Este Tarot is the original, then how to explain that other versions are existing with significant variations in the ordering of the Trumps, differences that are much greater than those observed with the Visconti Sforza?

To answer this question, we will consider the best known of all historical Tarot versions, the Tarot of Marseille. In fact, the Italian Tarot was specially made for the Italian aristocracy. From every deck, there existed only one single hand-painted version. This aristocracy was well-educated, and they were very well aware of the classic writings of Plato. The Tarot of Marseille, on the contrary, was a printed deck, with as target anyone loving card playing. To make the principles of the Tarot accessible to less educated people, simplifications where necessary. And together with the simplifications at the same time some clearer symbolism appeared on the cards, certainly to reinforce the ideas behind the cards.

The most difficult task was to translate the hand-painted Italian Trionfi structure, based on classical theories that few people knew, to understandable images for less educated people. While making little changes to the 22 images of the Trumps, links to classical writings had to be avoided, to give more understandable symbols related to daily life. The Roman Catholic Religion had to replace the classic philosophy. With these terms of reference, the Italian aristocratic Trionfi decks evolved to printed Tarocchi decks, and later to the Tarot of Marseille.

The order of the  trumps on the Tarot of Marseille does not at all correspond with the order as we have seen on the original deck made in Ferrara. The key to the order that is used here is every third card. Because the trumps start with number 0, these numbers are 2, 5, 8, 11, 14, 17 and 20. Every one of these cards represents directly or indirectly one of the seven Virtues:

My conclusion is that the cards numbered 2 and 5 represent the theological Virtues Faith and Hope.

Revelation 22:16 - I Jesus have sent mine angel to testify unto you these things in the churches.

I am the root and the offspring of David, the bright and morning star.

The Morning Star is a direct reference to Jesus. On the Este deck, we see two astrologers making calculations when they see the Star of Bethlehem appearing, announcing the birth of Jesus. On both cards, the star is a reference to Jesus. Jesus by himself symbolizes the Love of God, who has sent his one son to Earth, to die to save humanity. The Love of God, Charity, is the third theological Virtue.

In conclusion, the trump cards in each third position, represent the seven Virtues, respectively Faith (2), Hope (5), Justice (8), Strength (11), Temperance (14), Charity (17) and Prudence (20). We still easily recognize the three levels of the Soul, the first six cards representing Society, the next nine cards the Hardship of Life and the last six cards the Ascent to Light. So at the base level the three groups of seven cards have changed in size, and we have to organize them differently. The Tarot of Marseille is clearly subdivided in seven groups of three cards, with every group consisting of one pair of two closely linked cards, topped up by a Virtue. In fact, it goes even further.  The last two Virtues, together with the World, relate directly to the Trinity. The Star represents God the Son, the Angel the Holy Spirit and the World God the Father.

After this introduction, let us recall the order of the Tarot of Marseille using the spelling used on the Tarot of Jean Noblet:

(the Wheel of Fortune)

As we have seen, there is a clear trinary structure in this order. In the Tarot de Marseille, seven groups of three cards represent each a specific entity, with a closely related pair on the base, and a third card who represents a Virtue

The last card of the Marseille tarot is the World. We see a naked figure in a Mandorla, man and woman at the same time, representing God the Father, with around him the four living creatures representing the four evangelists. The card is called the World. This name is due to the limited knowledge that the ancient people had about our environment. In fact, this card represents the unlimited Universe, Eternity and God himself.

As we arrange these seven pairs in a circle, with the seven spiritual cards as spokes of a wheel above them, and we place the World card in the axis of the Wheel, then we have the Tarot of Marseille version of the Tarot Wheel.  Again, we have three levels of cards, each with their proper order. On the first level, we have a wheel representing the journey of the Human Soul through Society and the Afterlife, all the way up to God and Reincarnation. On the second level, where we have the spokes of the Tarot Wheel, we see the seven Virtues representing the moral values. Finally, on the third level, in the axis of the Wheel, we find a figure representing the Universe and thus God himself. 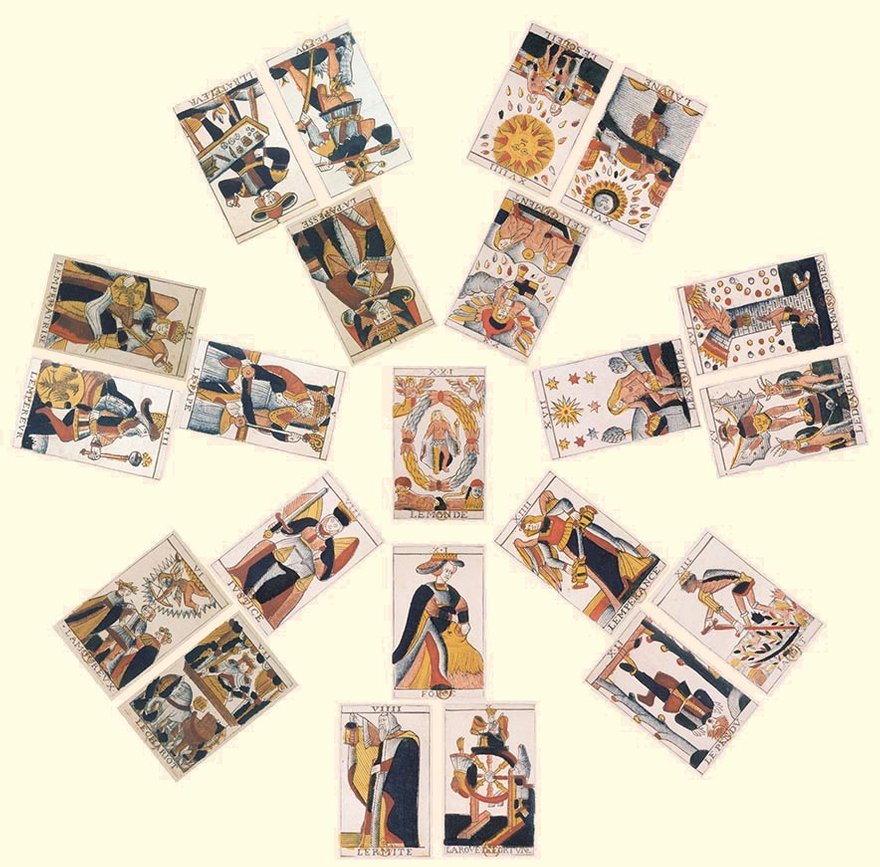 The World card, in the axis of the Wheel, representing the whole Universe and thus God, summarizes by itself all elements of the Tarot.

As a conclusion, we can say that the Tarot Wheel, using the concept that the Tarot is representing the human life cycle, the moral values and God himself, can be applied to very different versions of the Tarot. This representation goes very well with the Neoplatonic versions of the Tarot, as imagined by Italian aristocracy as we have seen with the Este Charles VI Tarot and the Visconti Sforza Tarot, but it is also the perfect representation of this cycle for the Tarot of Marseille, a version of the Tarot adapted to the printing press and accessible to a much wider and lesser educated audience.