The Knight is different from the other court cards. The knights do not exist in a normal card deck of 52 cards, what are they doing in a Tarot deck? In fact, the Knight is a messenger, and in this case, it is not the person who counts but the message.

The Knight of Coins announces some news that directly concerns the consultant.

The Knight of Cups announces a message about someone in the direct environment of the consultant.

The  Knight of Swords brings news from elsewhere and

The Knight of Batons has a message important for all of us.

The Knight as a traveler is also bringing some values of its own suit to other suits, and in return, he can bring back some values of other suits into its own. This specific aspect of a traveler related to the four quarters of the compass is very well illustrated by Giuseppe Mitelli in the Tarocchino deck he made around 1660 in Bologna. 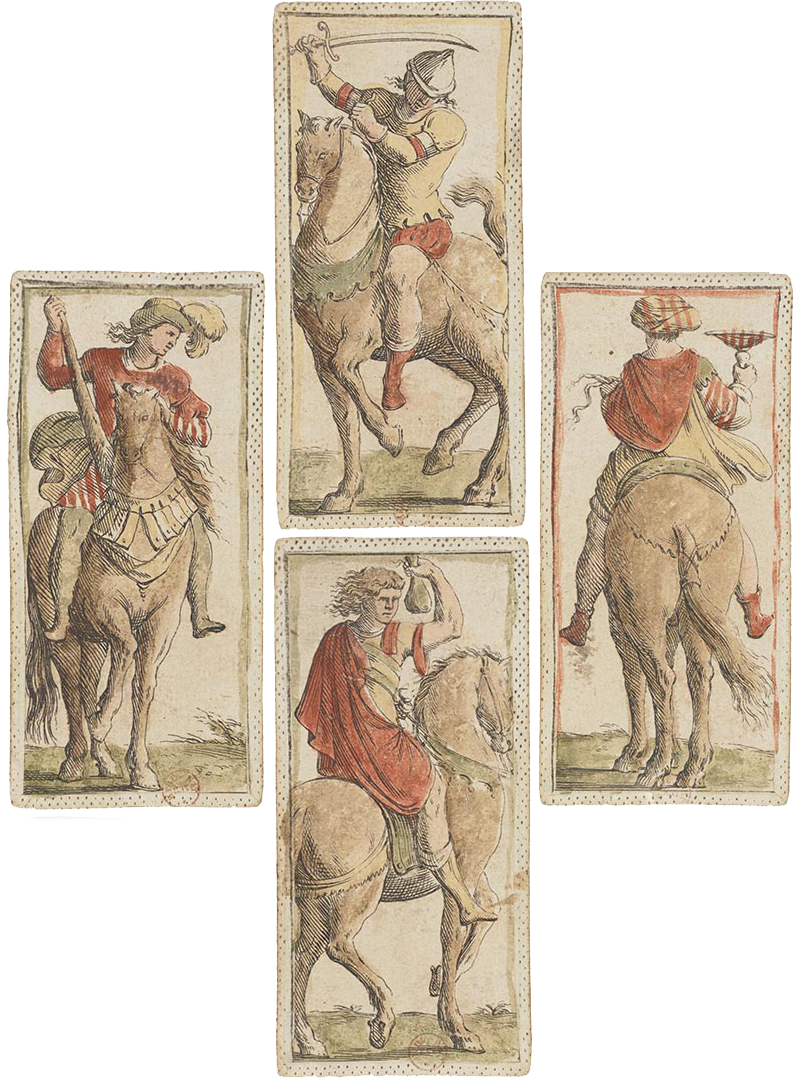 The four knights are all heading into a different direction, to bring their message to the four corners of the World. No other deck is illustrating this in a better way. The Coins are bringing their message to the Cups, who in their turn send a message to the Swords. The Swords are messaging to the Batons, who are bringing a message back to the Coins. What is very interesting is, that this image is mirrored regarding the image we saw with the pages, when I was using the Tarot of Jean Noblet. Again, this confirms my statement elsewhere on this site, that the Tarot of Marseille on purpose mirrored the cards. In the Tarot of Marseille we are not looking at cards, we are looking into a mirror at our Soul.

The Knights on the Visconti Sforza deck have also a intriguing message to tell. Let us have a look at the Knight of Swords and the Knight of Batons. 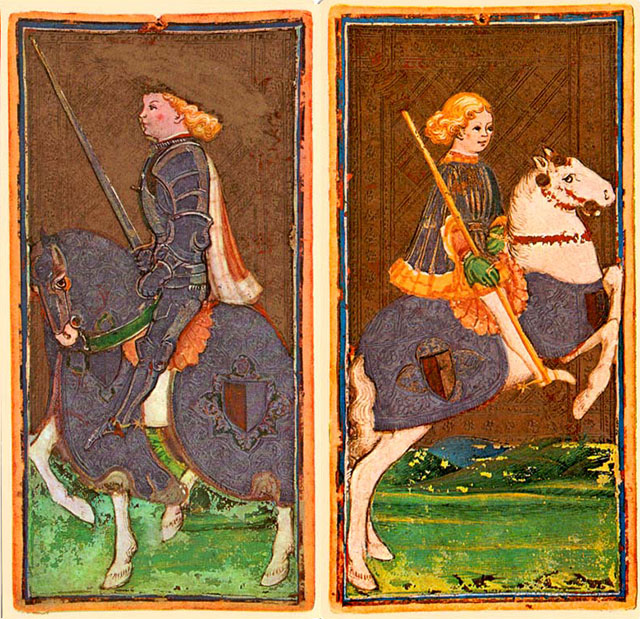 On the tissue covering the horses of the Knights of Swords and Batons we see a blazon, red on the left side and white on the right side. On the one of Coins is appearing the same blazon. The Visconti Sforza cards are full of heraldic elements of the Visconti and Sforza families, but this shield definitely is not associated with them. So, what are these shields doing here?

Filippo Maria Visconti had fought for many years against the Republic of Venice. Francesco Sforza fought many battles in his life, but once Duke of Milan, peace was his priority. He had a powerful ally in Cosimo di Medici, the effective ruler of Florence; with whom he had an excellent relationship. Together, they worked on peace with Naples and Venice. Thanks to this combined effort, on the 9th of April 1454 the treaty of Lodi was signed, that finally guaranteed peace between Venice and Milan. Positive factors, enabling this peace treaty, were Naples on the side of Venice and Florence on the side of Milan. The colors of Florence are red and white, red standing for the ruling class and white for the common people. The best known blazon of Florence is a red lily on a white flag, but earlier the blazon of the commune of Florence was "per pale argent and gules" (same shield as above, but white on the left side and red on the right side). In Florence, we see the blazon "per pale argent and gules" on many places, but on many other places we see also blazon "per pale gules and argent" (red on the left side and white on the right side) exactly as on the horses in the Visconti Sforza deck.

At the left a window in the Bargello Museum and at the right some blazons on the Palazzo Vecchio. Both versions can be found all over the old city of Florence. Given this fact, I suppose that the blazons on the two horses (and on the One of Coins) of the Visconti Sforza deck represent the blazon of the Commune of Florence, the closest ally of Francesco Sforza. I believe that the appearance of the blazon of the Commune of Florence on the Milanese Visconti Sforza cards is to honor the positive influence of Cosimo di Medici in establishing peace between Venice and Milan. The peace was signed in 1454 in Lodi and lasted for many years. For this reason, I also suppose that the Visconti Sforza cards (70 cards, 5 suits of 14 cards) were specially made for this occasion, in the same year, in 1454.