The court cards had a special place in the hand-painted Italian Trionfi cards because the commissioners of the cards were themselves part of a court. In later decks, the court cards were used to show differences between the decks, to point out particular characteristics. But how did it begin?

In the Mamlûk deck, there were three male figures. The highest one, the King, was called Malik. After the King there were two high officers, the highest was called Na'ib Malik (deputy of the king) and the second one Na'ib Thanï (second deputy). As an example, we show the court cards of Cups, in increasing order, with the Malik on the right side. 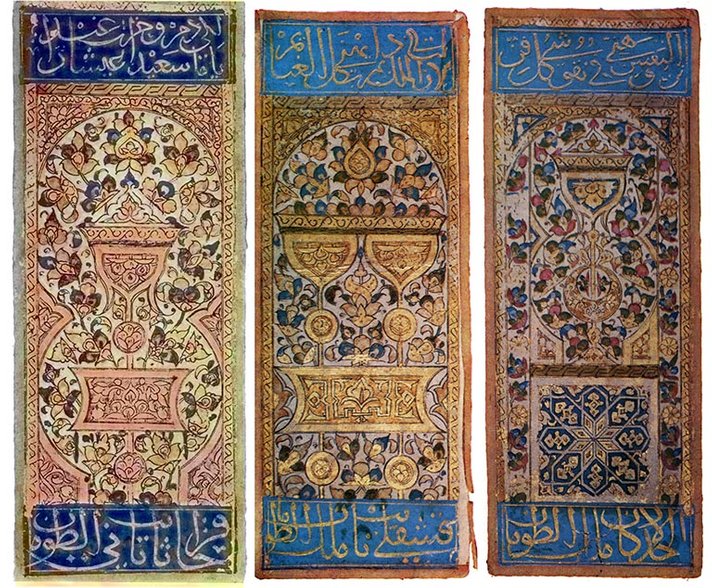 I cannot read Arabic, so I cannot explain the text on the cards. What I know is that on the upper side of the cards lines of poetry are written  and that in the box on the bottom of the card its name was mentioned.

On the oldest card we know, the Visconti di Modrone (Cary Yale Visconti), the three male figures get another name, they are called in English Page (or Squire), Knight and King. We show here below the corresponding cards of the same suit of Cups. 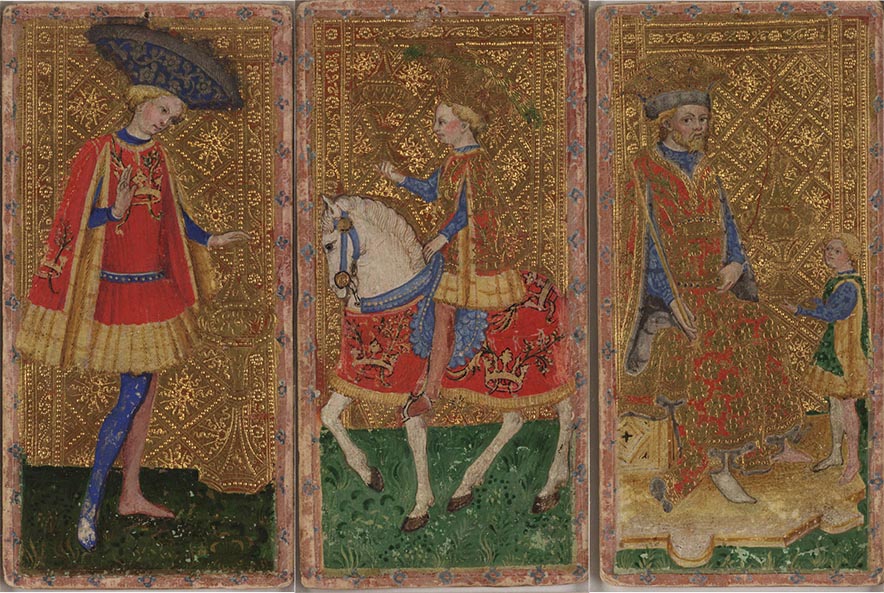 From left to right the Page, the Knight and the King. The three characters have the same heraldic elements on their clothes. In this case, the so called "Piumai", a crown with two different branches passing through, branches that have been identified as an olive branch and a palm brach. The Piumai was the personal device of Filippo Maria Visconti. On the Tarot of Marseille, it is used on the Ace of Swords. 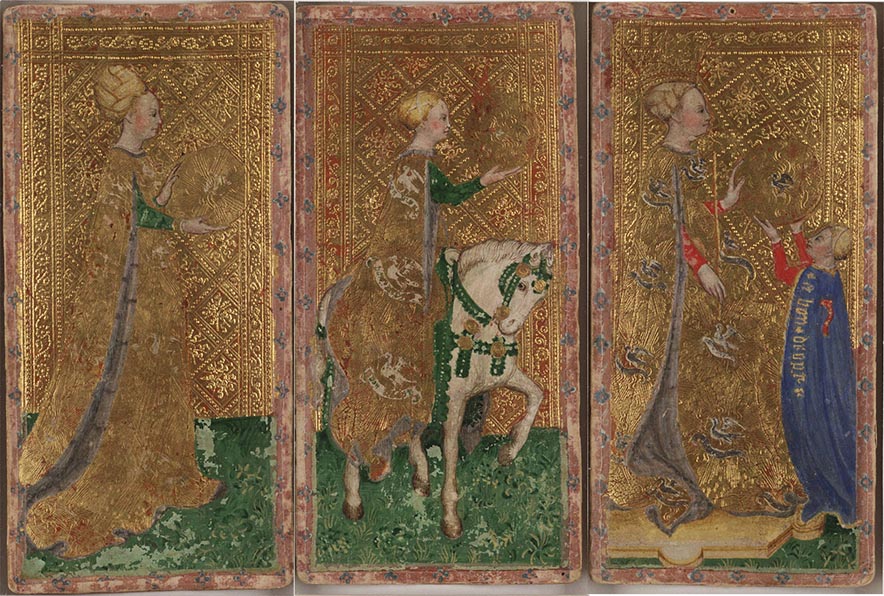 From left to right a servant, female equivalent of the Page, a Lady on a horse, female equivalent of the Knight and a Queen, female companion of the King. Every single character of the same suit (male or female) has identical heraldic elements on his/her clothes. For the suit of Coins, it is a dove against a wavy radiant sun and a banner under the dove mentioning "A bon droyt". This device was the personal device of Gian Galeazzo Visconti, first Duke of Mila and father of Filippo Maria Visconti. The wavy radiant sun also appears on the Coin symbols and the device "A bon droyt" on the clothes of the little girl giving the huge golden coin to the Queen.

What is clear from this representation of a court is that every suit can be considered as an army. The leaders of this army are symbolized by the court cards. The numbered cards are the soldiers. When playing a game of cards, these four armies are fighting against each other. When you have many cards of the same suit, your army is strong, but if you have several cards of every suit, the battle is difficult to coordinate. In this case, the different courts have to fight together to win a battle.

We have seen that the order of the suit symbols is Coins, Cups, Swords and Batons. The Visconti di Modrone exhibits on the court cards, in chronological order, the heraldic elements of the different Visconti dynasties. Gian Galeazzo Visconti is honored on the Coins with the radiant sun, his son Filippo Maria Visconti on the Cups with the Piumai, the daughter of Filippo, Bianca Maria Visconti on the Swords with flowering blossoms, and the future spouse of Bianca, Francesco Sforza on the suit of Batons with the fountain of life.

The Visconti di Modrone is the only known deck having three male and three female court members on every suit. On all later decks, the servant and the lady on the horse disappear, leaving us with a court consisting of a King, a Queen, a Knight and a Page. On the hand-painted decks, the other characteristics stay the same; all members of the same court are clothed in an identical way. Heraldic elements were not always used on all court cards, but on decks made for a special occasion like a wedding (the Visconti di Modrone deck in 1441 for the wedding between Francesco Sforza and Bianca Maria Visconti and the Este deck in 1473 for the wedding between Ercole I of Este and Eleanora d'Aragon, daughter of the Ferdinand I, King of Naples), heraldic elements of both families appears on most of the court cards.

The printed decks of the 16th and 17th Century

On the printed decks, it was not necessary to honor certain noble families; the court cards were used in another way to exhibit certain characteristics of the suits symbols. Because a picture explains better than a thousand words, let me show you some examples, four different courts from four different decks. Let us start with the court cards of the suit of Coins illustrated on the so-called Budapest sheets, dated to around the year 1500.

From left to right the Page, the Knight, the Queen and the King. A page can be a male or female servant at the court, here we see a female servant. We will come back to this female page when dealing with the Pages. The basic characteristics are the same as on the Visconti decks, the King and Queen are crowned and sitting on some sort of throne, the Knight is sitting on a horse and the Page is standing.

The next example consist of the court cards of the suit of Swords of the Rosenwald sheet dated, as the previous example, to around 1500, or maybe some years before that date The court figures have the same general characteristics as on the previous example. What is different here, is that the Knight is not a person riding a horse, but some sort of Centaur. We come back to this on the page dealing with the Knights.

The third example dates from the mid seventeenth Century and is taken from a French Tarot deck made by Jaques Vievil in Paris. We see here that on the same deck, the suit symbol of batons is illustrated in various ways, reinforcing the special place that this suit has in the Tarot. 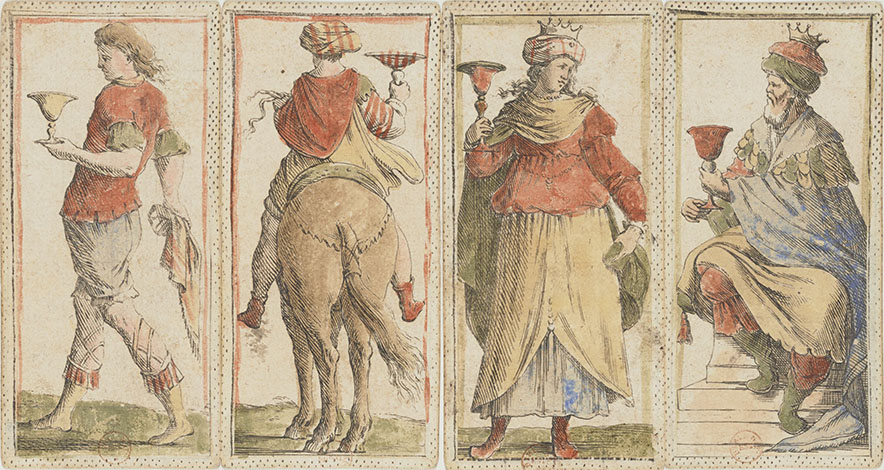 As a last example, the court cards of the suit of Swords derived from a Tarocchino deck made by Giuseppe Mitelli somewhere between 1660 and 1670. On this deck, the Kings and Queens are not sitting but standing (except for the King of Cups). However, they can easily be recognized thanks to their crowns. The Knight of Cups is in a rather strange position, with his back directed towards us. More about this feature on the page dealing with the Knights.

What do we learn from these examples?  Except for the Visconti di Modrone, that is an ancestor of the Tarot, all Tarot decks have four court cards:

(1) a page or a servant at the court, sometimes female, usually male and standing

(2) a knight, usually sitting on a horse

(3) a crowned Queen, usually sitting on a throne

(4) a crowned King, also usually sitting on a throne

The difference between the four court members is easy to make, when comparing age, clothes and posture. The figures were in the beginning never named nor numbered. Writing a name on the court cards started in France in the early seventeenth Century, with the anonymous Tarot of Paris. And even if the name is written on the court cards, there is no indication for the order, everyone was supposed  to know the hierarchical position of the four court members.

When court cards are appearing in a Tarot spread, most of them indicate persons in the real world. Their rank and their symbol give information about whom it can be. A Page maybe indicates a young person, not having responsibility yet, the Queen can indicate a mature woman and the King a mature man. The person might be selfish (Coins), emotional (Cups), intellectual (Swords) or a born leader (Batons). These are just some possible basic associations, many others may be applied, all depends on your intuition. The Knight has a slightly different place. Being a young adult, a messenger, the Knight indicates typically a message, some news.  This message can consider yourself (Knight of Coins), your family and friends (Knight of Cups), some other group of people (Knight of Swords) or everyone (Knight of Batons). A supplementary card is necessary to get an idea about the contents of the message.

Like all suit cards, every court card can be associated with an element and one of the inner planets. The Queen represents the female aspects, the goddess Venus and is associated  with the Cups. The King represents the male characteristics, the god Mars and is associated with the Batons. The Knight is a messenger, he is linked to the god Mercury and the suit of Swords. The Page finally is the child of Gaia, Mother Earth, and its association is with the Coins.

As an example, the Queen of Swords can stand for the emotional aspects within the process of justice, she softens a judgement and takes certain environmental aspects into account that are excluded by pure logical reasoning. Instead of judging an unknown person based strictly on proven facts, the Queen of Swords tries to enter into his personality. She considers his environment and what has happened to him before he committed a crime, before deciding about his eventual punishment.