INTRODUCTION TO THE TAROT WHEEL

Almost everyone has heard talking about the Tarot. Earlier and/or elsewhere it was called differently, like Trionfi, Taraut, Tarrot, Tarocco, Tarocchino and Minchate. Different Tarot decks are existing, that have in common 78 cards. But this can be less, like the original Trionfi decks (70 cards) and the Tarocchini decks (62 cards), or more like the 15th Century Visconti di Modrone (probably 80 cards) and the Minchiate decks (97 cards). Modern decks used for game playing or for divination have 78 cards, and any theme is possible. We have nature tarots, Wicca Tarots, erotic Tarots, animal Tarots, children Tarots, Celtic Tarots, Satan’s Tarots, Egyptian Tarots, name it, think about a theme and almost sure you will find a deck corresponding to what you are looking for. All of these decks can be used for divination. Ask the right question, lay the cards in a spread adapted to this question and the cards will help you find some answer. The type of question can be anything, from a simple yes or no question to a detailed analysis of your current situation in life.

Where is all this mysterious wisdom coming from? How is it possible that simple cards can predict the future or analyze your emotions? Where are these images coming from? How did the Tarot develop through time?

These are many questions and there are few answers. Ask the same question to ten different Tarot specialist. You will get ten different answers. Ask the questions to hundreds of different specialists. Hundreds of different answers is what you get. I am no exception to this rule. My answers may be different from all other answers you got before, and they will not cover all aspects of Tarot. Are my answers correct? Some parts might be close to the truth, in other parts I might be on the wrong way. You are welcome to contact me.  I am open for any question, correction, suggestion or criticism.

The Tarot as we know it today is a fruit of the influences of 18th and 19th century French occultists like Etteilla and Eliphas Levi. These influences crystallized in the early 20th century in a deck, conceived by the English occultist Arthur Edward Waite, who was a member of the Hermetic Order of the Golden Dawn and who was also a Freemason. The deck is known as the Rider-Waite deck (Rider was the publisher). It was soon after it's publishing in 1909 followed by a book called The Pictorial Key to the Tarot. The images on the cards were designed by Pamela Colman Smith. For this reason, the deck is also called the Rider-Waite-Smith deck, in abbreviations the RWS deck. And this is how I will call this deck on this site. The so-called Major Arcana of the RWS deck consist of 22 images, that find obviously their origin in an existing Tarot deck. This older Tarot deck that is called nowadays the Tarot of Marseille. Instead of Major Arcana, I will call these cards simply trump cards. I will call the Tarot of Marseille deck the TdM deck. Tarot of Marseille is a wrong name, the oldest-known survivor was printed in Paris and maybe the cards came originally from Lyon or even Milan. But actually, people know this deck as Tarot of Marseille, so in order not to confuse the readers, I will stick to this name.

The Minor Arcana has the structure of a modern card deck of playing cards, with some small differences. There are four suits and every suit has four court cards. For this reason, I will not use the name Minor Arcane, but I will call them with the more general description suit cards. The symbols on the suit cards used in the RWS deck are also based on the TdM with some small differences. In the RWS decks they are called Pentacles, Cups, Swords and Wands. The Pentacles are the equivalent of Deniers (Coins) on the TdM decks, and the Wands were very similarly called Batons. The numbered cards of the RWS deck, that I will call pip cards, show, like the TdM, in every suit and on every card between one and ten symbols corresponding to the suit, but in contrary to the TdM, they have some supplementary illustrations. Illustrating the pip cards was nothing new, at the end of the 15th century there existed already an illustrated deck, the Sola Busca deck. In 1907, the British Museum got photos of the cards from the Sola Busca family, at that time owner of the deck. Arthur Edward Waite was a regular visitor of this museum, and he used some images from cards of the the Sola Busca deck as a source of inspiration for his own deck. This is illustrated in the following figure. 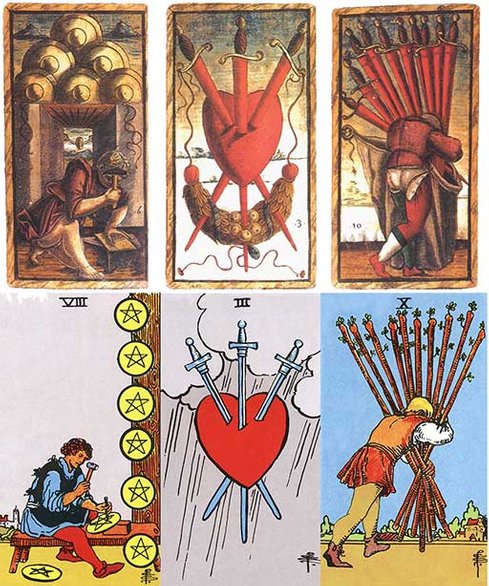 The illustrations on the corresponding cards from the two decks are not necessarily for the same number in the same suit. This is true for the 3 of Swords in both decks, but not for the two other cards shown here. He could use a different number in the same suit (look at the 6 of Coins in the Sola Busca deck and the 8 of Pentacles in the RWS deck) or the same number in a different suit (like the 10 of Swords in the Sola Busca deck  and the 10 of Wands in the RWS deck). Independent of the differences, the resemblances of these illustrations are striking. Some other illustrations, not shown here, are equally similar in design.

The Sola Busca deck has a special place in the history of Tarot. It is the oldest (dated to 1491) complete deck we have. Actually, it is property of the Pinacoteca di Brera, an art museum in Milan, Italy. The deck is not on a permanent exposition, to see them, a special authorization is required. The next oldest complete deck dates from the early seventeenth Century, the so-called Tarot of Paris. The French National Library in Paris has a copy of this deck.

In contrast to the Sola Busca and the RWS decks, most of the ancient decks show only the suit symbols. There are in most cases almost no illustrations, except for some floral decorations. Examples are shown in the next figure, where we see the first three pip cards of the 15th Century Italian Brera-Brambila deck and the corresponding cards of the TdM deck signed with the name Jean Dodal. The Brera-Brambila deck was created in Milan during the last years of the reign of the Duke Filippo Maria Visconti, who died in 1447. The Jean Dodal deck was  created over 250 years later at the beginning of the 18th Century in the French town Lyon. 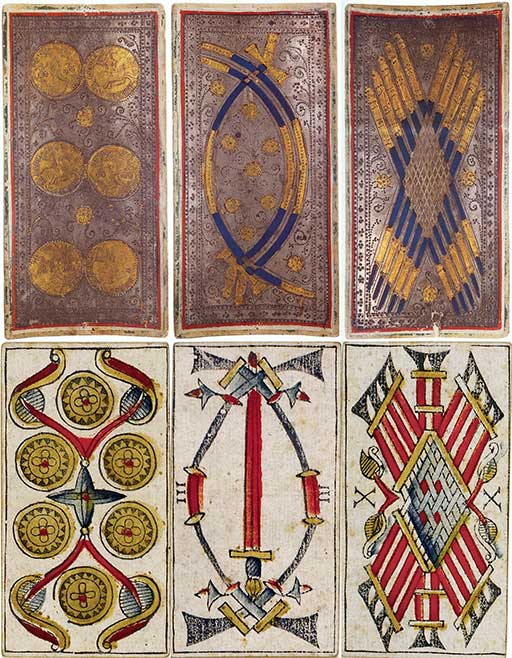 On this site, we will try to show you  how the Tarot developed, from its early beginnings up to approximately the 18th Century.  You will see how the different suits represent the cycle of being born until giving life yourself, how the pip cards represent the cycle of life from birth to death and how the 22 trump cards give a detailed  description of all facets of human life.  The Tarot started as a game, with both the suit symbols and the illustrated trumps carrying a message for  its users.  The message behind the cards changed over time as did the structure of the deck.  There are very few objects on Earth having such a rich and mysterious history as the Tarot.

On these pages, you will find very few words about to interpret the Tarot. That is because my philosophy of the Tarot is rather different from most scholars. Tarot has a general structure that can be applied to any deck. Details on a specific card should have no importance for a correct interpretation of a card, in contrary, they can mislead the interpretation. Details on a card are details that have been added by a specific card maker, in most cases to clarify his interpretation of the card. For this reason, details on the cards are essential to understand a specific deck, but they are of almost no importance for the general understanding of the Tarot. Worse, they guide your interpretation and limit your own intuition. Let me illustrate this with an example. 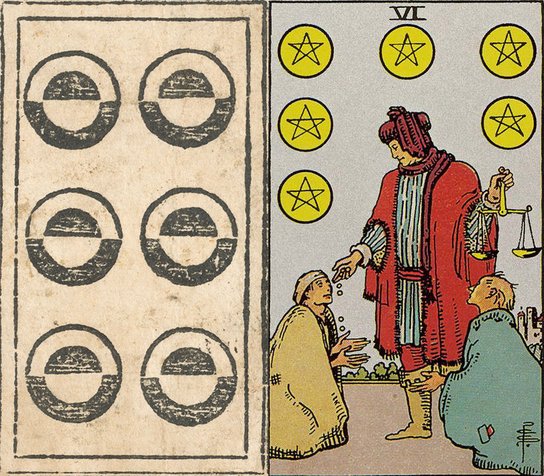 On the left side we see the six of Coins of the Rosenwald deck published around 1500 (actually conserved in the National Art Gallery in Washington, who kindly provided me high-resolution images of the deck), and on the right side the six of Pentacles of the RWS deck published in 1909. On the RWS deck, we see a rich person giving pieces of money to some poor people. You might immediately  think at giving or receiving a gift. However, this is not at all the interpretation that flashes through my mind looking at the six of Coins of the Rosenwald sheet. The number 6 is the number of Harmony, and the suit of Coins is dealing with yourself, your health and your wealth. So for me the six of Coins indicates for me that  the consultant has no great problems himself. He has probably no financial concerns, and his health is good. The drawing on the RWS deck is very misleading. I chose this example because it is a classical example. Waite did not invent his interpretations of the cards, they were for a big part based on the interpretation of French occultists. In the interpretation of Etteilla, there was the word "Présent",  that means "Now". According to Paul Huson, Waite followed the translation of Samuel Mathers, who misunderstood this word (Mystical Origins of the Tarot, 2004) and translated it as a present, a gift. In conclusion, the poorer the illustrations on the card, the richer the possible interpretation. This does not mean that details are always bad, often they really help to get a better understanding of the structure of the Tarot. Later more on this topic.

So, be welcome on my site, as a guest on this astonishing journey through the Tarot.