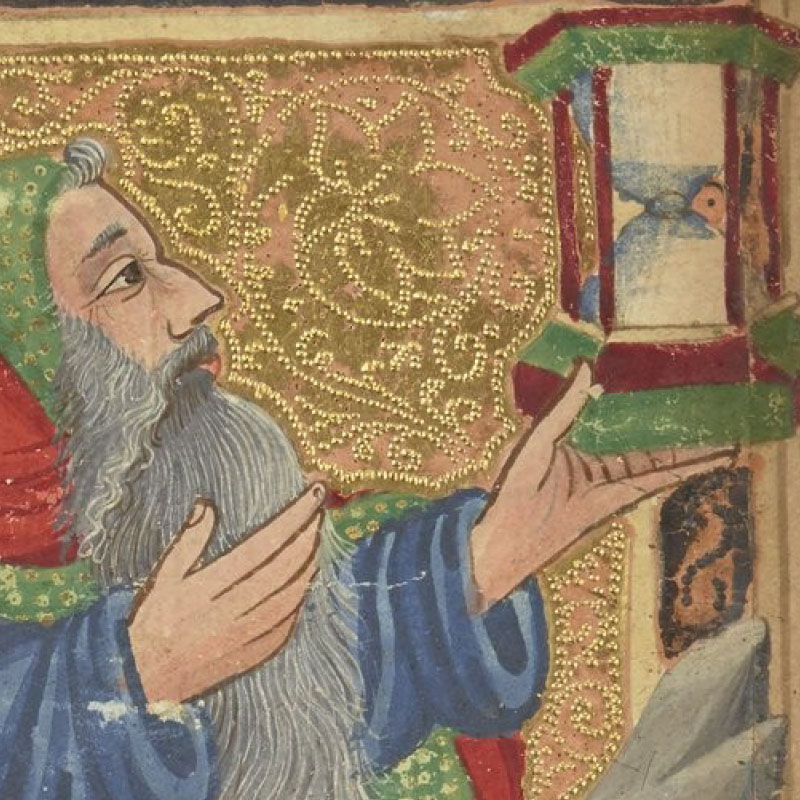 The Hermit was originally placed after the Wheel of Fortune and personified Time. To start this page I show you a closeup of the corresponding card of the so called Charles VI deck where the Hermit is illustrated as an old hunchback who is holding an hourglass in his hand. This hourglass is a traditional attribute of Father Time. All surviving handpainted Trionfi decks represented time in a similar way:

On all three cards the hourglass, symbol for time, is a prominent feature. The notion of time was quite different from the notion we have today. Today we measure hours, minutes, seconds and fractions of seconds, and their length is fixed. Not so in the 15th Century. The day was divided in 12 hours from sunrise to sunset. So the length of an hour varied with the season; minutes and seconds did not exist. Time was a measurement between to distinct moments, in the case of a day between sunrise and sunset. In the Tarot time is also a measurement between two moments, birth and death. The hourglass of Father Time is there to remind us that the time that is accorded to us for living has an end. Our life will terminate if in our hourglass the last grain of sand falls down. The hourglass also reminds us that rebirth is possible. Once emptied, the hourglass can be turned, and our life will start again from scratch.

So now, let us have a look at how this card was represented on the earliest printed cards. 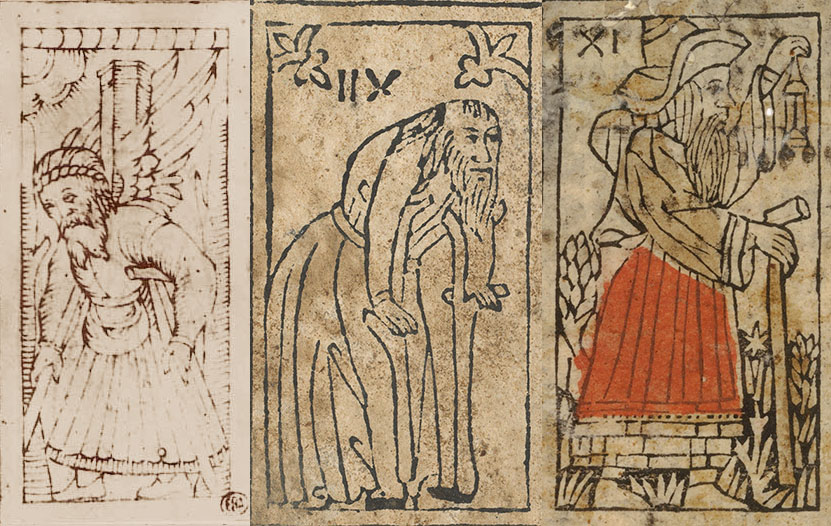 On the first card we see a bearded and winged old man walking with crutches with a column behind him. This is an allegory for Time and as we will see here below this is a typical image for the Bolognese Tarocchini of which it is the oldest representant. The particular sheet containing the Old Man is conserved in the Ecole des Beaux Arts in Paris. The Rosenwald sheet is simpler and showing only an old man on crutches. Most scholars attribute the card to Florence, although in view of its similarities with the Tarocchino it might also originate from Bologne. The Rosenwald sheet is conserved in the Metropolitan Museum of Art in New York. On the Budapest sheets we see an old man with a cane. The image is in composition very similar to the Este cards, but the hourglass has been replaced with a lantern. Without surprise the Budapest sheets originate from Ferrara or maybe Venice. We talk about the Budapest sheets, because several sheets have been discovered and most of them are conserved in the Budapest Museum of Fine Arts. Three sheets are conserved in the Metropolitan Museum of Arts. Here they are called the Dick sheets because it was a certain Mr Dick who donated the sheets to the museum. All the sheets are only partial sheets, and all of the contain only a limited number of cards. Some of the cards are missing and other cards appear on several sheets. From the Old Man three copies exist, two in Budapest and one in New York. Here below the three surviving cards compared, the right most one is from the Dick sheet. 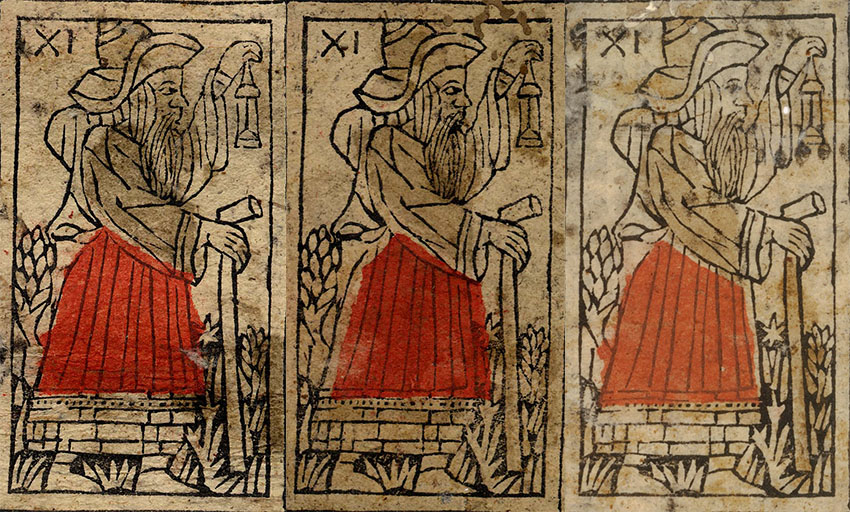 As we will see later, the Old Man of the Budapest sheets is very similar to the one portrayed in the Tarot of Marseille. Now we have seen that the oldest Old Man cards are obvious allegories of Time, let us see how the allegory of Time was portrayed at the end of the Middle Ages and in the early Renaissance

All three illustrations are from 15th Century Italian artists. All three images are part of a series of six images illustrating a poem of Patrarca, I Trionfi. The Triumph of Time is the fifth in these series. The artists are from left to right Zanobi Strozzi, born in 1412 in Florence, Jacopo del Sellaio, born in 1442 also in Florence and an unknown Venetian book painter who was called Maestro del Plinio di Giovanni Pico della Mirandola. On all three illustrations we see the same winged old man on crutches and on all three illustrations we see an hourglass, that symbolizes the passing of time and finaly death. These images are very similar to the contemporary Tarot illustrations. One particularity of most personifications of the Triumph of Time is that father Time is standing on a chariot that is pulled by deers, as can be seen on the Florentine illumination here below, dating from 1441. 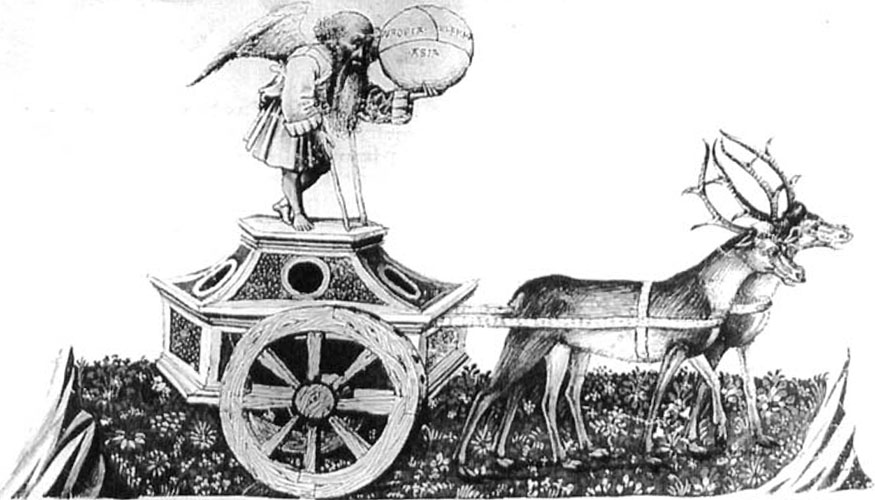 On this particular illustration of the Triumph of Time, father Time has a globe in his hand instead of an hourglass. In the next two centuries, Italian Tarot related cards stayed close to the original cards, as is shown on the next illustrations. We say Tarot related cards because they are from Tarocchino and Minchiate decks. In Tarocchino decks tha cards numberes from 2 to 5 have been removed and in Minchiate decks the Trump cards are extended with the missing virtues, the four elements and the 12 signs of the Zodiac. The Popess disappears and the Pope becomes a second Emperor.

The first two cards are standard Bolognese Tarocchino cards. They are almost identical to the card from the Rothschild sheet, shown earlier on this page. The first one is made by an unknown cardmaker, dated to around 1600 and conserved in the French National Library. The second one is made around the middle on the 18th Century by a certain Angelo de Maria. The third card is a special Tarocchino version designed in the 1660s by Giuseppe Mitelli in order of Filippo Bentivoglio. The last two cards are Minchiate cards from respectively Bologne and Florence, both from unknown cardmakers in the 18th Century. On the Tarocchino cards we see a winged old man walking with crutches. On the Minchiate cards the wings disappear, but the hourglasse is back, transperced by an arrow. Next to the old man is laying a deer, as we have seen a typical attribute for the Triumph of Time. The arrow is symbolizing death, reinforcing the message of the hourglass.

In France the cardmakers followed the model of the Budapest sheet, and they called the card Lermite. 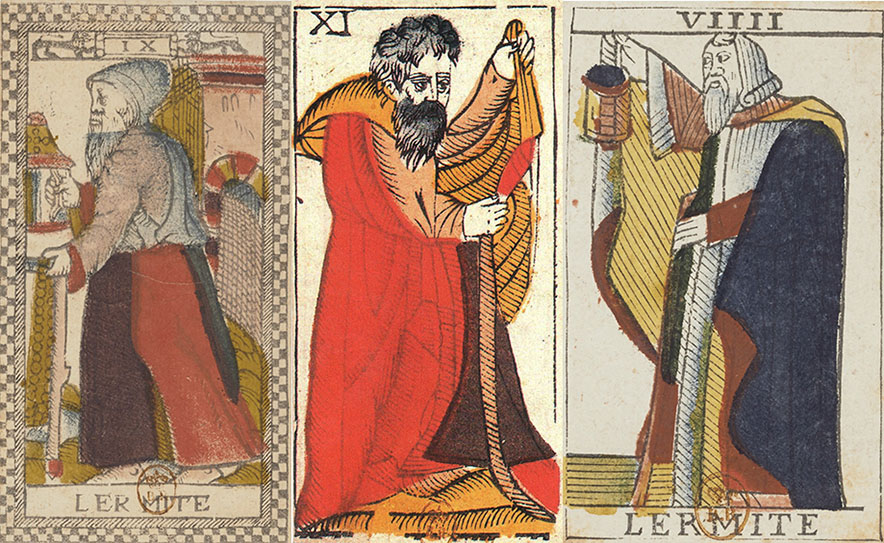 All three cards are made in the 17th Century in Paris. From left to right we see the Tarot of Paris, made by an unknown cardmaker early in the 17th Century. The second card has been made by Jaques Vievil around 1650. The youngest of the three cards is the Tarot of Jean Noblet, the oldest known example of the Tarot de Marseille. It is not exactly clear what the Hermit is holding in his hands on the first two cards, but on the card designed by Jean Noblet it is clearly a lantern. And so changes the card from the allegory of time to a wise old man guiding us on our path of life. We note the mirrored position of the Noblet Hermit with respect to the card of Vievil. In the next centuries the card will remain virtually unchanged. 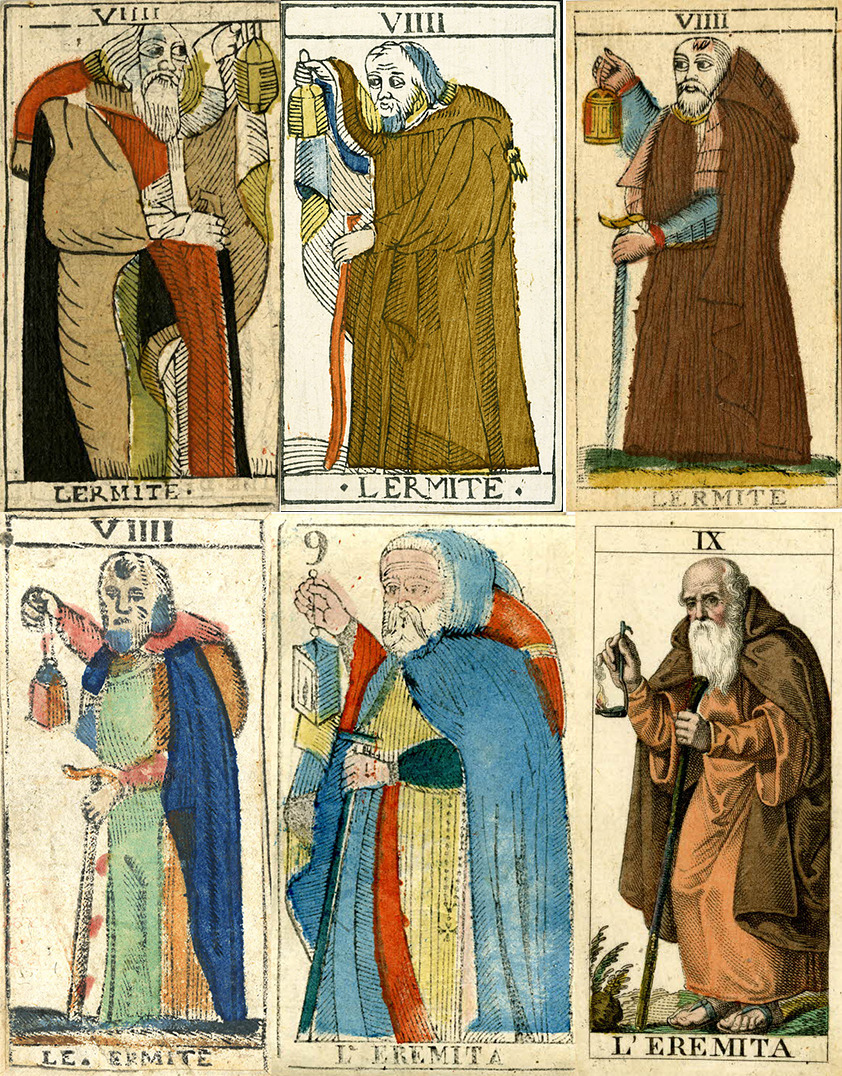 Here are six examples of the Hermit from the 18th en the early 19th Centuries. The upperleftmost card is made by a certain Guilaumhe Dubesset in Lyon in the 18th Century. It has the typical style of the Tarot of Lyon (better known as the Type I Tarot of Marseille) although some of its cards (incluiding the Hermit) are printed in mirror. The second card is printed in 1718 in Solothurn in Switserland by François Heri. It is a typical example of the type II Tarot of Marseille. The third card was printed around 1760 in Fribourg (Switserland) by Joseph Krebs as an example of the Tarot of Besançon. On the second row three Italian Tarocchi cards. From left to right a Tarocco di Bologna made by Francesco Berti in the late 17th Century in Bologna, an example of a Piedmont Tarot created in the early 19th Century by Vergnano in Turin and finally the well known Tarocco delle Rocca deck published in the early 19th Century by Ferdinando Gumppenberg in Milan. On the Vergnano Tarot the hermit is becoming a monk with a rosary clearly exposed. In the 17th Century Italian cardmakers started to reproduce Tarocchi cards based on the French Tarot cards, so during many years we see the French titles on Italian cards. Some cardmakers, like Vergnano, produced cards both in French and in Italian versions. The style of the Italian cards is now clearly based on its French counterparts. The printing techniques stayed the same until the early 19th Century when great improvements took place as we can see in the Gumppenberg card.

However, not all cardmakers followed exactly the French model. Here below three examples. 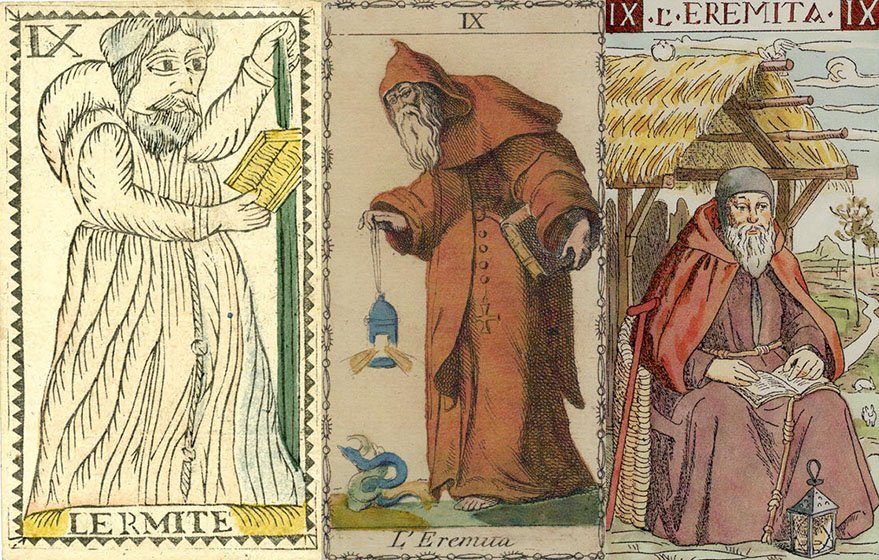 From left to right a late 18th Century Belgian Tarot made by Jean Gisaine in Bruxelles, the early 19th Century Tarot of Lombardy, published in Milan by Ferdinando Gumppenberg and il Ermita created in 1893 in Benvagienna, a small town some 50 km South of Turin, by the Italian cardmaker Giovanni Vachetta. On all three cards the hermit is now clearly a monk holding a prayers book or maybe a Bible. On the Belgium and Vachetta Tarot he has a Franciscan girdle around his waist and on the Tarot of Lombardy he has a rosary. On the Belgium Tarot the lantern has disappeared, on the Vachetta Tarot it is only a secondary attribute.

We are no approaching the period of the occult Tarot decks. The original occult Tarots keep the symbolism of the Hermit like it is on the Tarot of Marseille. 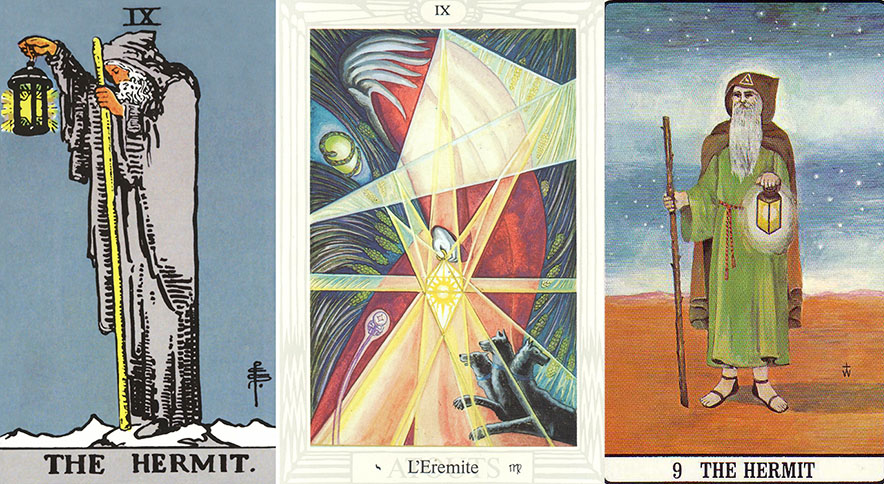 All three cards are inspired by members of the Golden Dawn. From left to right we have the Hermit drawn by Pamela Colman Smith on instructions made by Arthur Edward Waite, the Herlit drawn by Lady Frieda Harris on instructions of Aleister Crowly and finally the Hermit drawn by Robert Wang on instructions of Israel Regardie. The style is very different, but on all three cards we clearly see a bearded old man with a brightly shining lantern in his hand. Most modern Tarots stay rather close to this symbolism, others drift further and further away leaving only the lantern as the binding element. Here below some examples. 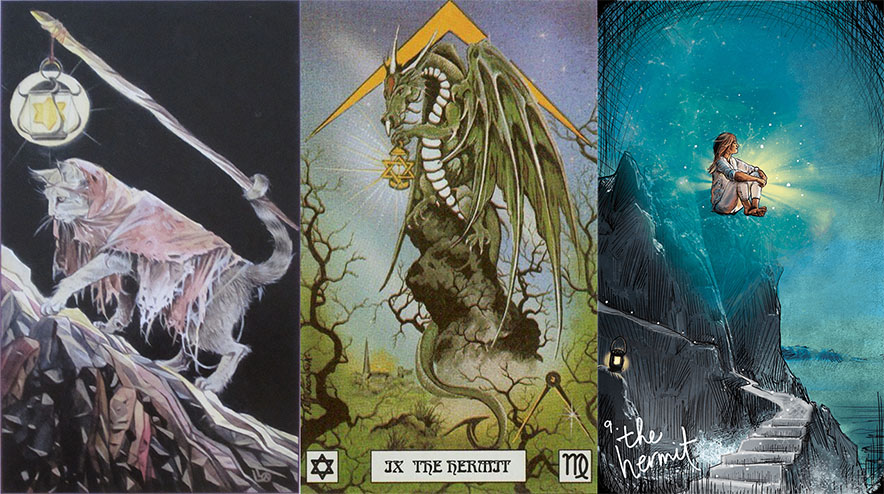 From left to right the Pagan Cat Tarot created by Barbara Moore, the Dragon Tarot by Peter Pracownik and the Light Seers Tarot by Chris-Anne.

With these last images we end our history of the Hermit. He started as an allegory of Time warning us that life has an end and that we have to prepare ourselves for this moment. Later he develops itself into a wise old man guiding us on the path of life.