A SHORT HISTORY OF THE POPES

In the Middle Ages, the religious leaders were frequently, next to their office in Church, powerful secular leaders. As an example, we can cite a prince-bishop in the Holy Roman Empire who was a member of the Visconti family, Ottone I Visconti. In 1262, he was elected as archbishop of Milan, in opposition to Martino della Torre. Martino was a member of the Torriani family, who ruled at that time over Milan. An internal war was the result, and in 1277 Ottone became lord of Milan.

Except for the name, there is no evidence that Ottone Visconti was related to the contemporary Tebaldo Visconti, better known as Pope Gregory X, Pope from 1271 to 1276. Tebaldo Visconti was born around 1210 in Piacenza, a town in Lombardy, one of the later possessions of the Milanese Visconti family.

The Popes were not different from the Bishops. They did not content themselves with spiritual power, but they were also seeking for temporal power, and they were ruling over vast territories. The Pope was ruler over the Papal States, covering the central part of Italy, with Rome as capital. There was a bitter struggle over the papal power by France and Italy, and between 1309 and 1378 the Popes were even officially based in France, in Avignon. Despite the protests of King Charles V of France, Pope Gregory XI moves the Papacy back to Rome in 1376. After the death of Pope Gregory XI in 1378 a new Pope was chosen in Rome under the name of Urbain VI. Urbain VI was a very authoritarian Pope and the cardinals in Rome, who were in majority French, elected with the support of the Kingdom of Naples, another Pope, who adopted the name of Pope Clement VII. Supported by France, Clement VII, being French, moves back to Avignon. Starting 1378 there are officially two Popes. Charles IV, the Holy Roman Emperor, dies the same year, so he cannot arbitrate the question. His son Wencelas was more concerned by alcohol than by politics, and in consequence too weak to have any influence on this question.

After the death of Urbain VI and Clement VII, the cardinals elect a new Pope in Avignon, Bonifacius IX, extending in this way the schism in the Church. Clement VII is followed by Benedict XIII in 1394. Benedict XIII was from Spanish origin, and Spain continued to support the Anti-Papacy in Avignon. In 1406, a new Pope is elected in Rome, Gregory XII. In 1409, a Council in Pisa tries to resolve the question of the two Popes, but they only worsen the situation by electing a third Pope, Alexander V. Both other Popes, Gregory XII in Rome and Benedict XIII in Avignon refuse to recognize pope Alexander V. Pope Alexander V dies within a year under very suspicious circumstances. He is followed up by Pope John XXIII. In 1412, when Filippo Maria Visconti became Duke of Milan, there were 3 people claiming to be the one and only official 3 Pope, Gregory XII in Rome, Benedict XIII in Avignon and John XXIII in Pisa.

Sigismund, who became King of the Romans in 1411 contrasted with his older brother Wencelas as a strong leader. On his initiative, a new Council was ordained in 1415 in Konstanz (Germany). On request of the Council, Pope Gregory XII abdicated as Pope of Rome. Pope John XXIII of Pisa was deposed and condemned for 70 different crimes (crimes like sodomy, incest, murder, cannibalism, atheism, etc.). Pope Benedict XIII refused to abdicate, and it was only after the death of Gregory XII in 1417 that a new Roman Pope could be chosen, Pope Martin V. By that time Benedict XIII had lost the support of France, and he had to move to Spain. Except for Aragon from where he originated, he had no support nor influence anymore, and from 1417 on, none of the Spanish Popes (Benedict XIII had two simultaneous successors) are recognized by the Roman Catholic Church as an anti-Pope.

Just before he died, Martin V called in 1431 the Council of Bale. His successor Eugene IV did not recognize this Council, and he tried to end it even before it started. He did not succeed and had to recognize the Council in 1433. In 1439, he moved the Council from Bale to Ferrara. 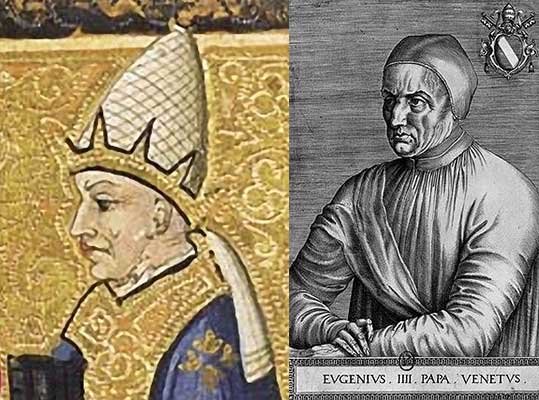 In the above figure on the left a detail of the Pope on the Estensi (Charles VI) deck and on the right an illustration of Pope Eugenius IV (IIII). Both faces seem to depict the same person. It is quite well possible that Pope Eugenius (Eugene) appears on the Pope card made for the Duke of Este, in honor to his decision to move the Council to Ferrara.

A certain number of the participants in Bale, did not agree with this decision, they tried to depose Eugene IV, and they choose a new Pope, Amadeus VIII of Savoy, who took the name of Felix V. So again there were officially two popes. Remark that Pope Felix V was strongly supported by Filippo Maria Visconti, who had a rather bad relationship with Eugene IV, who was born in Venice, his most important enemy state. More significant, Amadeo VIII was his father-in-law. Bianca of Savoy, Filippo's wive, is his eldest daughter. In 1447 Pope Eugene IV dies, and he is replaced by Nicolas V. Two years later, Felix V abdicates in favor of this new Pope of Rome and in 1451 he dies at the age of 68. Pope Felix V is the last officially recognized anti-Pope.  Remember that on the previous page, I identified the Pope on this deck as being anti-Pope Felix V.

The Visconti had tumultuous relationships with most popes (with as exceptions Martin V, who was an ally of Maria Filippo Visconti and the antipope Felix V, his father-in-law), while the Estensi were in rather good relations with the Papacy. Remark that Milan was part of the Holy Roman Empire and that Ferrara was part of the Papal States. Gian Galeazzo Visconti became Duke of Milan through the decision of Wencelas, King of the Romans and Borso d'Este was made Duke of Ferrara by Pope Paul II.