A SHORT HISTORY OF THE HOLY ROMAN EMPIRE

If we want to understand the images on the Tarot, a little historical background will not harm us. On the cards we find among other allegorical figures an Emperor and an Empress, so who were they, and what was their influence on the Tarot?

The first real Empire in Europe was the Roman Empire. Older civilizations might have been important, or they might have had an extensive territory, none of them claimed itself as an Empire. The term Emperor has been invented by the Romans. The Roman Empire disintegrated in Western Europe in the 5th Century. Charlemagne, also known as Charles the Great (in Latin Charles is equivalent to Karolus and “the Great” is written as Magnus, so he was called Karolus Magnus that changed in common language into Charlemagne) was the first after the Romans to reunite a big part of Europe. Just the same as the name of Jules Ceasar, that became equivalent to emperor in many languages (Kaiser, Keizer, Czar), the name of Charles the Great became the equivalent of King in most Eastern European languages (Kral, Kiraly, Karalius, Korol). Grandson of Charles Martel and son of Pepin the Short, he became King of the Franks in 768, first together with his brother Carloman, and since 771 alone. He expanded his kingdom over big parts of Western Europe, and on Christmas day of the year 800, being 58 years old, he was crowned Emperor of the Roman Empire by Pope Leo III in Rome. After his dead in 814 the Empire was divided in three distinct parts, but although the territory changed constantly, the central part survived as the Holy Roman Empire. Since the beginning of the second millennium, the King of the Germans was also called King of the Romans, and he could claim the title of Holy Roman Emperor. The problem was that this title had some religious aspects, and could only be validated through a coronation by the Pope. Before this coronation could take place in Rome, the King of the Romans had to become King of Italy, validated by a coronation with the Iron Crown, that was held in Lombardy (Milan). 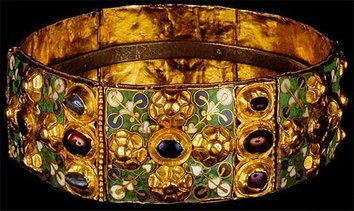 The King of the Romans was elected by a council of prince-electors. Not all Kings made it to be crowned as an Emperor, so there were a lot of periods that in fact the college of prince-electors ruled over the Empire. Emperor Charles IV managed to regulate the succession of the King of the Romans in 1356 with his famous Golden Bull. The number of electors was fixed at seven, seven being a holy number referring to the seven days of Creation. There were three ecclesiastic electors, prince-bishops. Three was a holy number referring to the Trinity. There ware also four secular rulers representing the four nations in the Empire. These prince-electors were mighty and ruled the Empire, in the times there was no person bearing the title of Emperor.

Emperor Charles IV had the titles of King of Bohemia (King of the East), King of the Romans (King of the North), King of Burgundy (King of the West) and King of Italy (King of the South). His son Wencelas was elected King of the Romans in 1476. After the dead of his father in 1378, he also became King of Bohemia. He was better known as Wencelas the Drunk. He was never crowned as Emperor and, because of his incapacity to rule (to stay sober), he was in 1400 deposed from his title of King of the Romans by the prince-electors. His younger brother Sigismund, King of Hungary since 1387, is crowned as King of the Romans in 1411 and after Wencelas died in 1419, he also becomes King of Bohemia. Sigismund is finally crowned King of Italy in Milan in 1431. When he was in Milan, he did not meet the Duke of Milan, Filippo Maria Visconti, who was a very introvert and shy person. However, the Duke did everything possible to comfort the stay of the future Emperor in Milan, but he refused to personally meet him. Sigismund spent almost four years in Italy, and in 1433, 55 years after his father, Charles IV, the previous Emperor, died, Pope Eugenius IV crowned him as the new Emperor of the Holy Roman Empire. On his way back to Germany, Sigismund stayed some time in Ferrara. In the period he was in this city, Niccolo III of Ferrara got a son that he called Sigismondo to honor the Emperor. Emperor Sigismund died in 1437 without having a male heir. We find his portrait very probably on the Emperor cards commissioned by Filippo Maria Visconti (the 1441 Visconti di Modrone and some years later the Brere Brambilla Visconti). The double beard of the Emperor, as well as the hat he is wearing, are typical Hungarian. Sigismund was sent to the Hungarian court at the age of 10. He became King of this country at the age of 19. The Hungarian lifestyle had marked him for the rest of his life.

This discussion about the Emperor, illustrates that the hand-painted cards, commissioned by influential people, were extremely personalized. On most Trionfi decks we find the heraldry of the Visconti, Sforza or Este families. The people on the cards were often depicting real people. But in despite of this personalized coating by the Italian nobility, the structure of the cards was untouched, and the message on the hand-painted cards is as clear as on the Tarot of Marseille.  Drawing people that could be recognized easily (at least for the families who commissioned the decks), helped to understand the educational message of the cards.