To represent the Commoners, the artists who painted the Trionfi cards, deliberately choose two of its lowest members. They did not choose the leaders of a Republic or a rich banker or merchant, no, the Italian nobility considered the Commoners almost as low as animals,  they had no culture nor education. In any case, the nobility needed them as servants, farmers and taxpayers, but otherwise you should better avoid them. As a consequence, the artists painting these decks choose two very low-ranking representatives, a Fool, and a Conjurer. 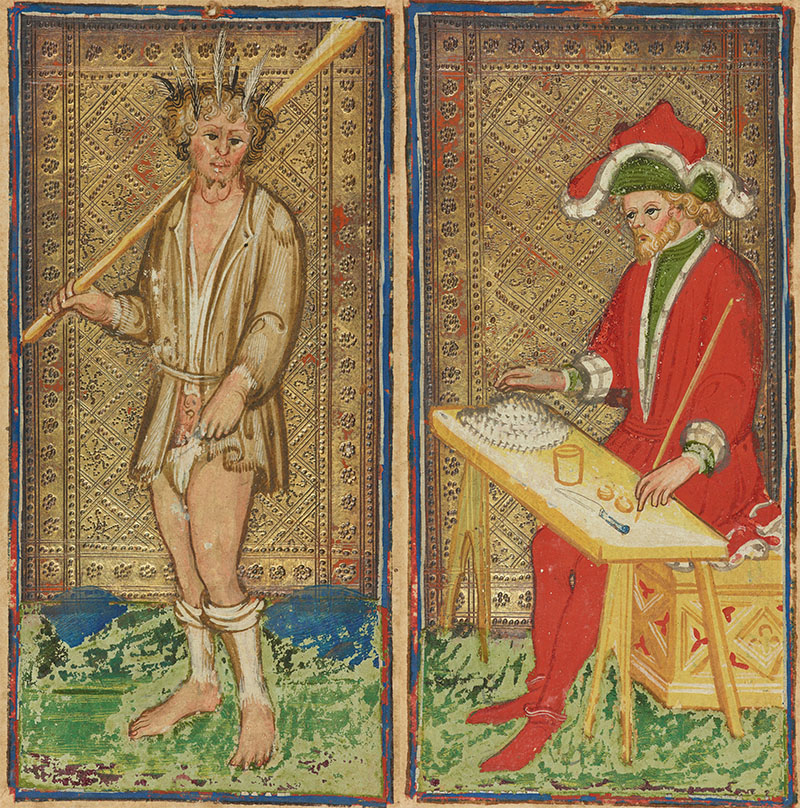 The two cards we are presenting here did not exist in the cards of the Visconti di Mordrone. Bianca Maria Visconti had a lot of contact with the Este family, and it is very probable that both families used in the middle of the 15th Century the same fourteen Trump card structure illustrations based on the same principles. It is impossible to say who influenced who, probably both families are responsible for part of the ideas expressed in these images.

On the first card representing the Commoners in the Visconti Sforza deck, we see a barefooted man in ragged cloths. He has seven feathers in his hair, indicating the lightness of his mind, that is closer to the Heavens than to Earth, it is pure and innocent. The man does not know the rules of Society, he's considered a fool. Behind him, some blue mountains, representing obstacles in our mind. In the first fourteen cards of the Visconti Sforza Tarot, green mountains seems to represent obstacles in the real world, and blue mountains obstacles in our mind. All mountains behind the Fool are blue, another sign that his mind is closer to Heaven than to Earth. His face has no expression at all, his eyes are staring in the nothingness. On his shoulder a big club, a common attribute for a fool when portrayed in Art.  The oldest Italian sources call this card El Matto, a term that indicates somebody who lost partially or completely the capacity of reasoning, to be short a mentally ill person, an idiot or a fool. In that period, people thought that fools were possessed by the devil, so they were avoided by society. Not all Tarot decks represent the Fool as negative, as the Visconti-Sforza deck does. We come back to this question when looking at the individual Trump cards. In the figure here at the right, we see the detail of a medieval French miniature, representing a fool holding a stick and using a small animal to play as if it was a set of bagpipes. The image taken from f. 262 of a French Bible historiale, dated to 1410-1415. 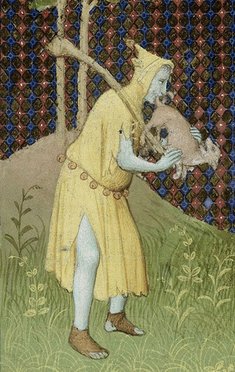 The second card is called El Bagatella. We have to emphasize that the names used here, have been given many years later in an anonymous sermon against game playing (Sermones de ludo cum aliis) written by a Dominican friar in the second half of the 15th Century in Ferrara. The Italian nobility might have called these cards in another way when the Visconti-Sforza deck was created. We see a well clothed man sitting behind a simple table with some objects that make us immediately think of a conjurer. The table looks like the tables you find on a village fair. You can easily remove the legs and transport the table. On the table, there is a hat, a cup, some dices or coins, a knife, and in his hand he holds a conjurer's wand. Except for the had, the other objects symbolize the four suits. The clothes of El Bagatella are rich, but even this is an illusion. He is rather poor, and the red color immediately identifies him as belonging to the lowest class. The nobility avoided red colors, they preferred colors like blue and gold. Bagatella is an Italian word that means something without value. So, El Bagatella is someone who is occupied with things without the slightest importance. From what we see, maybe Italian nobility called him “Il Prestidigitatore” (the Conjurer). The Journey into the Tarot begins here, there are no obstacles in sight, the future is open, everything is possible. But don't trust a conjurer too much, the card represents not only Creation, but also Illusion.  Like in the image below, made around 1475/1480 by Hieronymus Bosch, we see a typical conjurer on a village fair, where a man fascinated by the conjurer's tricks, has his purse stolen. The thief is probably working for the conjurer. 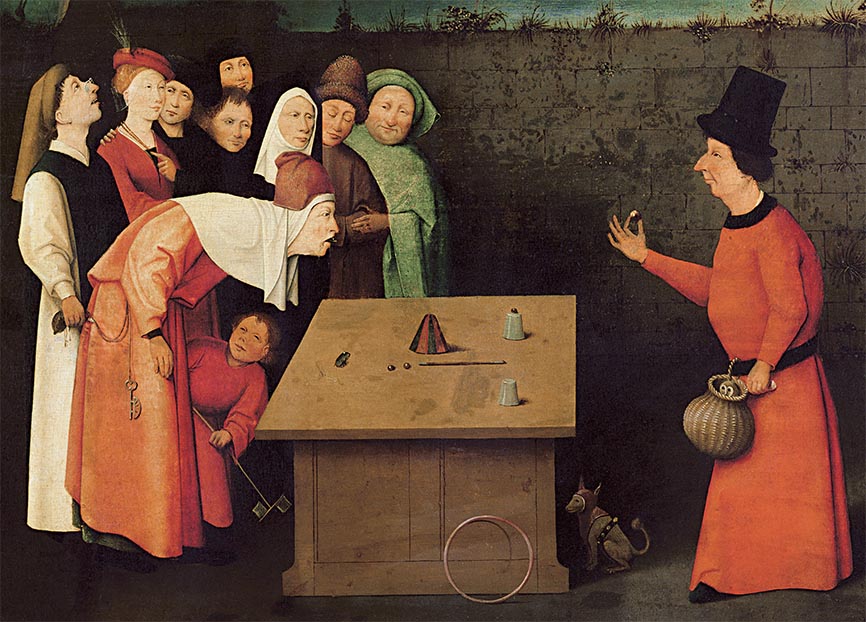 The Fool and the Conjurer form the first pair. They have a lot in common. Both don't have a fixed place to live. They dwell from village to village, the Fool to find something to eat and the Conjurer to earn (or to steal) some money.