DECKS INSPIRED BY THE TdM MODEL

In the 16th Century the interest in Italy for Tarocchi decks disappeared slowly to die out completely in the 17th century. As a consequence, the Tarocco (plural of Tarocchi) decks with 78 cards disappeared as a game. Next to the standard card decks without a specific trump suit, only the Tarocchino and the Minchiate decks continued to be played in a large region around Bologna and Florence. In the 18th Century, the Tarot regained great interest in Italy, and many card makers in Italy started to copy the Marseille Tarot, including their French titles. As we can see here below, the Tarocchi games with French titles are all copies of the Type I Marseille Tarot. It is possible, as we have seen on the page dealing with the ancestors of the Marseille Tarot, that the Marseille tarot had his origins in the region around Milan, but the 18th Century Tarocchi cards are clearly copies of the French Marseille Tarot and not of the earlier Italian decks, that didn-t have names on the cards. Let us have a look at some decks, compared with their French ancestor:

It is not before the second half of the 18th Century, that Italian card makers started to produce Tarocco cards with titles in Italian. Some of them, like the Torino-based Vergnano produced playing cards in both languages. Another Torino-based printer, even offered two different language decks in one single wrapping. Here below examples of these cards, with on the left side of each pair the Beltramo signed French-titled deck and on the right side the Rossi signed Italian-titled cards:

Remark that the Torino-based Italian card makers did not blindly copy the French titles. La Maison Dieu of the Tarot of Marseille became La Maison on the Beltramo and Vergnano decks. Not shown here, but in both decks, Le Jugement became L'Ange (the angel). Tarocchi decks in both languages were made in many Italian cities, like Torino, Milano and Bologna. However, the French-titled cards persisted the longest in the Piedmont area. When in the rest of Italy only Italian language decks were produced, in the Piedmont the card makers continued to produce decks in both languages. As an example, here below cards of two earlier-mentioned decks, produced in the first half of the 19th Century by Vergnano.

In Torino we see another particularity when moving from the French titled cards to the Italian titled cards. Some card makers try to distinguish themselves from the TdM pattern, not only in changing the titles, but also in changing some details on the cards. Let us have a look at the Beltramo/Rossi couple shown before and to the Vergnano couple in both languages:

From left to right we have the Fool of Beltramo (le Fol), the Fool of Rossi (Il Matto) and the same two cards in both languages by Vergnano. Among other small differences, we see that the jumping animal has been replaced by a butterfly and that a flower replaces the other vegetation. This is typical for the Italian language Piemont style cards.

In other regions in Italy, Tarot decks continued to develop. Many card makers took the TdM model less strictly. Although still based on their imagery, it shifted further and further away, and cannot be considered simple clones of the Marseille Tarot. The printers used more sophisticated card making technique, enabling the card makers to come with their own designs. Here  two examples from the printing press of the Milano-based German printer Gumppenberg, realized at approximately the same time as the two Vergnano examples here above. 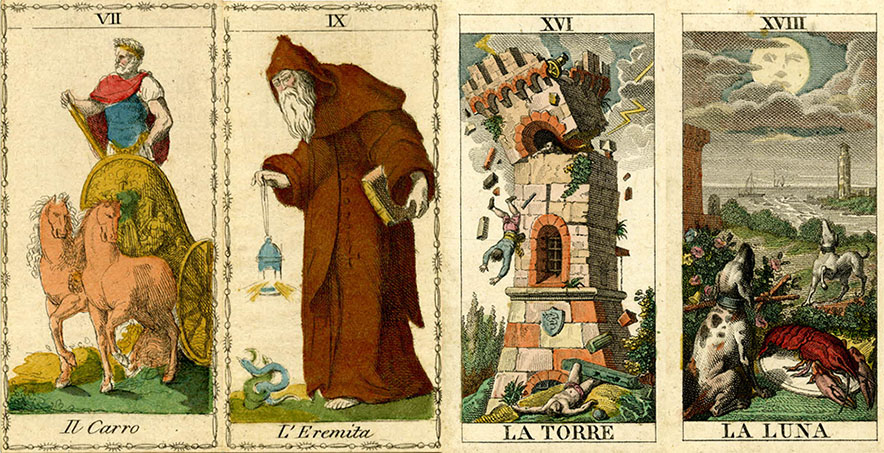 Not only in Italy, the TdM model inspired local card makers. At the beginning of the 18th Century, the French crown inflicted heavy taxes on the card making industry. One of the victims was  the Tarot de Marseille and there was a certain decline in the card making industry in France. This has a positive effect on the card making industry in the surrounding countries (except for Spain, where the Tarot was introduced only as late as the 20th Century), so we find in that period many "Tarot de Marseille" decks (with small differences) in the surrounding countries, especially in Switzerland. When Court de Gebelin writes in 1781 in Le Monde Primitif about the Tarot, he states that this game does not exist in Paris, but that the game is popular in Italy and Germany. One of the most representative cards for showing regional differences is the Pope. Examples of this card in regional decks, here below.

All four cards above were printed in the 18th Century, The first card on the left is published in 1718 by François Heri in Soloturn, Switzerland. It is a card respecting in all details the TdM type II. The second card has been published by Franz Antoni Biiolman in Unterwalden, also in Switzerland. The exact year is not known. The deck mixes both type I and II characteristics, and several cards (like the Pope) are printed in a mirrored position. The third card is published by Johanes Neumur in Mannheim, Germany. Also here, the exact year is unknown. The deck belongs to a variant of the TdM, called the Besançon Tarot. These decks are produced in regions where the Protestantism is dominant, and the Pope and the Popes have been replaced by the Roman gods Jupiter and Junon. The last card has been created around 1775 by Vandenborre in Brussels. This type of cards, that was produced in Belgium and the North of France, was called the Belgian Tarot. Also in these decks, the Pope and the Popess were replaced, the Pope by the Roman god of Wine, Bachus.

In the 18th Century, Switzerland became one of the most important Tarot-producing countries and the Besançon model (that probably originated in Strasbourg), one of the most widespread Tarot variants. The Besançon model was so influential, that it became a model for some other variants. Let us have a look at some more cards, using the Sun card to highlight the differences in style.

From left to right we have first a Swiss made Tarot of Marseille, published in 1751 by Claude Burdel in Fribourg. This Sun card is one of the most joyful Tarot Sun cards we have, with a smiling sun disk decorated with a headscarf and flowers and two dancing children below. This Sun became typical for all TdM decks produced in Switzerland. The second card is printed around 1820 by J. Jerger (probably Jacob, maybe Jean) in Besançon. It is a typical representative of the Besançon style cards. The third card is from a variant on the Tarot of Besançon, called the Tarot of Epinal. This style of cards was printed for the first time around 1830 by the card printing factory Pellerin in Epinal (Vosges, France). The last card is from a Swiss deck called the 1JJ Tarot. The JJ stands for Jupiter and Juno, implying that the main source of inspiration for this style of card was the Tarot of Besançon. The first version of this deck was printed in 1831 in the card factory of Johann Georg Rauch in Diessenhofen (canton of Thurgau). In the Southeastern part of Switzerland, there exists a card game called Troccas, that is played exclusively with the 1JJ Tarot decks. The decks are produced until today by the Swiss card factory AGMüller. A member of the Müller family, Johannes Müller, bought the card factory of Johann Georg Rauch in 1838.

With all these variants on the TdM style, how many variants, can we distinguish? Excluding some decks, that cannot be considered as a separate style (Tarot of Lombardy, Tarot of Vachetta) or as a real descendant of the TdM (Belgian Tarot, with as main source of inspiration the Tarot of Vievil and the Tarot of Paris), we will enumerate on the next page the different TdM related styles and show 4 characteristic cards of each style.