THE MICHELINO DECK - A 5TH SUIT WITH 16 TRUMP CARDS

Pier Candido Decembrio, a man close to the Italian nobility, has written in 1447, short after Filippo Maria Visconti died, a biography about the life of the Duke of Milan. In this work, there is a description of how Filippo Maria and his court loved to invent new card games and new card decks. The Duke was a very shy and introvert person who hated mass manifestations (like triumphal processions) but who adored strategic games (like chess and card playing). Approximately between 1420 and 1425, the young Duke Filippo Maria asked Marziano Rampini di Sancto Aloisio, better known as Marziano da Tortona, to create for him a deck with a new concept. A possible occasion for the creation of this card deck might have been the announced birth of his future son, who at the time of birth turned out to be a girl (Bianca Maria Visconti, 1423). It might have been possible that, considering this coming birth, he instructed Marziano da Tortano that the deck had to glorify his family and his ancestors.

Marziano da Tortona was a well-educated man, with good knowledge of the classical times and of astrology. Very close to Filippo Maria, he was his teacher in Pavia since 1409 when Filippo was only 17 years old, Marziano had become his secretary and counselor. He was very honored to create this new deck in agreement with the classical principles and the Visconti genealogy.

He commissioned this work for 1500 Ducats, a lot of money in that time, to the artist Michelino da Besozzo, the same artist who had painted the Visconti genealogy (see the introduction to Tarot Development), so a perfect choice to create this deck. When the deck was finished, and to facilitate the use of this deck, Marziano wrote an explanation for Filippo Maria, describing in detail the deck and its cards. The Michelino deck has been lost in time, but this explicating note is still conserved in the "Bibliothèque Nationale" in Paris. Martiano died around 1425, so we are certain that the Michelino deck must have been created before this date. Given the birth of his first child, 1423 seems a plausible year of creation.

In the introduction of this note, Marziano states that a serious man is supposed to abstain from game playing when the game is considered as childish or when it does not conduct to happiness (as often in gambling games). Then he explains that in this particular game many famous heroes are portrayed, that were renowned models of virtue, to such a degree that after they died, they were considered as Gods.

There were sixteen heroes in the game, sixteen being considered as a perfect number by the Milanese court. Four of them represented the Virtues; Jupiter, Apollo, Mercury and Hercules. It becomes clear from the later text that they represented in this order Justice, Wisdom (Prudence), Temperance and Strength. The second series of heroes represented the Riches: Juno, Neptune, Mars and Aeolus. The third series of heroes were all famous Virgins; Pallas, Diana, Vesta and Daphne. The last four heroes represented Pleasures; Venus, Bacchus, Ceres and Cupid. Subordinated to the heroes, there were four suits, each symbolized by a different bird. Eagles were associated with the Virtues, Phoenixes with the Riches, Turtle-doves with the Virgins and Doves with the Pleasures. The symbolism of birds was closely related to the (para)heraldry of the Visconti. For detailed information about the heraldry of Gian Galeazzo Visconti, entirely taken over by his son Filippo Maria, one should consult the document "Heraldry in the Trecento Madrigal", a thesis of the Canadian Sarah Carleton, that can be downloaded from here.

Every suit had one court card, a King, who governed the suit. The number of suit cards is not given, but knowing that all card games by that time had 10 pip cards per suit, we can safely assume that this deck also had 10 numbered cards per suit. For the virtues and the virgins, the value of the suit cards increased in ascending order (from few to many) because it is good for us to cultivate virtue and continence. For the riches and pleasure, the value of the suit cards increased in descending order because if our wealth and pleasure are increasing, this will deteriorate our spiritual life. So having few of them is better than having many. 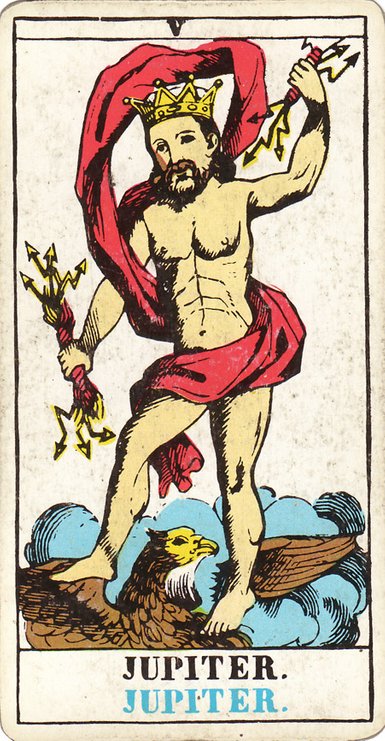 None of the suits had a higher value than another suits, except for the heroes that are higher than any suit card, including the Kings. Among each other, the heroes have a different value according to their rank and their suit. The most valuable card was Jupiter, the highest ranked in the Virtues. On the figure to the left, we see an image of Jupiter as depicted on the 1830 Epinal Tarot. Epinal is a French town close to the German border, and most of its inhabitants are protestant. So on their cards, Jupiter was replacing the Pope and Juno the Popess.

The next card in the Michelino deck  was Juno, the highest ranked in the Riches. She was followed by Pallas and Venus, first ranked is respectively the suits corresponding to the Virgins and the Pleasures. Next were the second ranked heroes in each group in the same order, and so on, until Cupid as last and least valuable hero. Martiano describes in full detail the meaning of every hero and what he did to be venerated as a God, starting with the first hero, Jove, a king from Athens who brought Justice to the then still savage antique times and who taught the people how to live. He was also called Jove the Good and (according to Martiano) after he died he was worshiped as Jupiter, highest in the Roman Pantheon of Gods. He describes the values and actions of every hero until Cupid, the last one, who is only a boy, nothing of a virtue, rather cruel and violent. He was the son of Mars and Venus and capable to turn the hearts of poor lovers in burning torches. No one was safe for him, not even Jupiter. Then Martiano describes in detail their appearance on the cards, starting with Jupiter sitting on a starry throne, in full splendor with regal emblems. Four stars above him, he was surrounded by symbols for reason, justice, power and protection. He describes in detail every hero to finish with Cupid who is depicted as a winged boy, armed with the bow of love and fully nude, this nudity according to him because lovers desire one another completely (here below the interpretation of the Renaissance painter Caravaggio)

It is beyond this web page to describe all heroes completely, but for those interested, the text has been translated by Ross Gregory Caldwell and is first published in "The Playing Card", vol. 33 n°2, oct-dec 2004. The translation of Martiano's note has been posted on the Internet on the excellent website "trionfi.com". Remark that Martiano numbers the heroes from 1 to 16, starting with the highest card, the inverse of the later ordering of Trionfi decks.

What a real novelty was of the Michellino deck, was that these sixteen heroes were at the same time related to the suit cards, but also independent of these suits. In the game, all of them were of a higher value than any of the suit cards. So, this was maybe the first card game with an independent Trump suit.

When Filippo Maria Visconti dies, the Michelino deck changes hands. Iacopo Antonio Marcello, who fought together with Francesco Sforza against the Ambrosian Republic, had been offered the deck and its explication note. In November 1449, he sends them as a gift to Isabelle, Queen of Lorraine (in France). In the accompanying letter (also translated by Ross Caldwell and available on the same website) he refers to the deck as a Trionfi deck invented by the Duke of Milan himself and painted by the finest painter Michelino. From there on we lose trace of this deck, only copies of the letter of Marcello and the note with the xplanations of Martiano survived time. 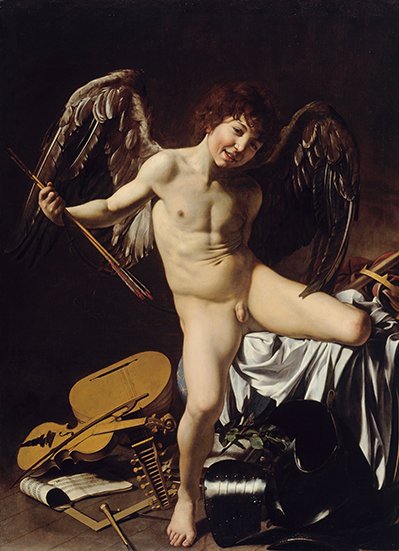