TAROT DEVELOPMENT - INTRODUCTION TO THE VISCONTI

On these pages, we will see how the Tarot might have been developed, from its  earliest ancestors to the Marseille Tarot. In the section about playing card history, it is explained how the suit symbols on the Arabic Mamlûk cards developed into the suit symbols as we know them today, Coins, Cups, Swords and Batons. They were easily adopted because the Western cultural heritage found its roots in the Celtic civilization that was using the same kind of symbols.

In Western Europe, playing cards did not exist before the introduction of the Mamlûk cards around 1375. There exists a document that describes how in 1227 in Northern Italy noble children are instructed in the Virtues with pictures, that were called "Carticellas", small painted illustrations. This fact is mentioned in 2009 by Emilio Salas in his book "El gran libro des Tarot". According to him, this information comes from a diary of a French traveler. Unfortunately, he does not give precise sources. In any case, many illuminated manuscripts make an extensive use of drawings,  drawings that don't have only illustrative purposes. Gian Galeazzo Visconti had created in his family possessions in Pavia one of the most famous libraries of his time, with many illustrated manuscripts. His youngest son Filippo Maria Visconti was sent here at the age of 10 years, and he stayed in Pavia for the next 10 years. He must have spent many hours in this Library.

In the 15th Century, Italians were very religious, mostly Roman Catholics, and they believed in only one God. According to them, when Roman and Greek mythology are telling stories about classical Gods, these stories were in reality based on ancient legends dealing with famous people. Some of them were so famous that they became worshiped like Gods.

In 1402, the first Duke of Milan, Gian Galeazzo Visconti, father of Filippo Maria Visconti, died. At his funeral, his genealogy was read in public. His real genealogy was known for approximately ten generations. When he had become Duke, Gian Galeazzo needed a much longer genealogy to show the high origins of his ancestors. His collaborators didn't do a small job. His genealogy went back for 50 generations from father to grandfather and so on, and started with the Trojan hero Anchises, father of Aneas, who was the ancestor of the Romans. According to this genealogy, Anchises was married with nobody less than Venus, daughter of Jupiter and Juno. This supposed link made the Visconti family direct descendants of Jupiter, the most important figure in the classic Roman pantheon of Gods.

The painter Michelino da Besozzo was commissioned to illustrate this genealogy. He finalized this document in 1403. The Visconti genealogy illustrated by Michellino is still existing. The troops of King Louis II of France transported many of the documents of the Visconti family from Pavia to France. The figure here below shows the first part of this document, where we see Jupiter with on his sides Anchises and Venus, followed by an illustration of Aneas. 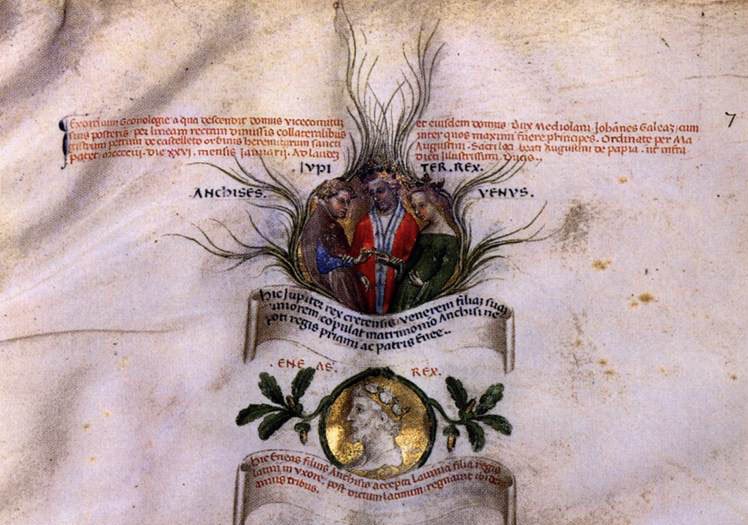